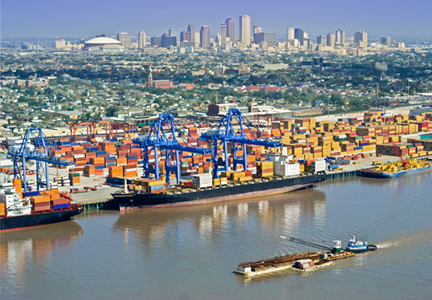 In 1905, the City of New Orleans established the New Orleans Public Belt Railroad (NOPB) to give all railroads entering the city fair and equal access to the Port. The NOPB succeeded—developing the Huey P Long Bridge over the Mississippi River and the 26-mile river-front belt that now moves 170,000 railcars per year between six Class I railroads, local industry, and North America’s sixth-largest port.

The City saw an opportunity to monetize this asset by privatizing; they retained a Big 3 accounting firm to value the NOPB, who after many months arrived at a value of $60 million. The Port, concerned that privatization would risk industry and port growth, sought a strategy to intervene.  Meanwhile, five short line holding companies made generous offers to the City, contingent upon reviewing the financial and operating data.

The Port of New Orleans (Port NOLA) retained SRF to value the NOPB. In just twelve weeks, SRF sorted vast operational and financial data to determine trends for each business segment, growth opportunities, revenues, expenses, and free-cash-flow projections. In recognizing the real constraints of labor contracts, commercial contracts, and capital investment requirements, SRF calculated the NOPB’s value as $10 to 13 million — IF a buyer’s cost of capital was between three and four percent, which was Port NOLA’s bond interest rate at the time. With private sector capital cost, however, the NOPB had negative value.

The large accounting firm made a string of classic errors in valuing railroads – assuming continued public subsidy for maintenance, focusing on EBITDA and ignoring capital maintenance impacts on free cash flow, ignoring the elasticity of certain rate structures, not knowing the terms of Class I switching agreements, and assuming non-operating income would convey with an operating concession.

SRF presented its findings to the Port executive team, then the Mayor’s office, then individually to Port Commissioners. All agreed there was only one path forward. The City “paused” its RFP process and struck a deal with the Port now widely celebrated, swapping some historic wharves for the NOPB. The City grows its French Quarter district and improves community river access — the Port grows its business with the railroad. Everyone wins.